After the adventures in the Isle of Wight, attempting to walk the full 100km coastal path in 24 hours (and failing at the half way point), I vowed to never sign up for a long walking event again.

Of all the challenges I had faced the Isle of Wight proved to be the most strenuous event I had taken part in, and that included the London Marathon the year before.

So I was content in believing I would hang up my walking boots, and only allow them to see the light for short distances.

That was until a member of the team floated the idea of trekking the full length of Hadrian’s Wall. 84 miles from coast to coast, starting in Bowness on Solway and ending in Newcastle.

With the plan to walk the distance over three days I thought why not. With rest in between, it would be a breeze compared to the Isle of Wight.

How wrong could you be?

Day one – Bolness on Solway to Gilsland (34 miles)

After spending the night at Wallsend Wigwams, a bright an early start was on the cards with the group setting off at 6am to tackle the longest distance of the three days. The weather was in our favour: cool, dry, overcast with occasional sunny spells. It was a great start to the day and we were in high spirits, apprehensive but full of energy to get day one done. 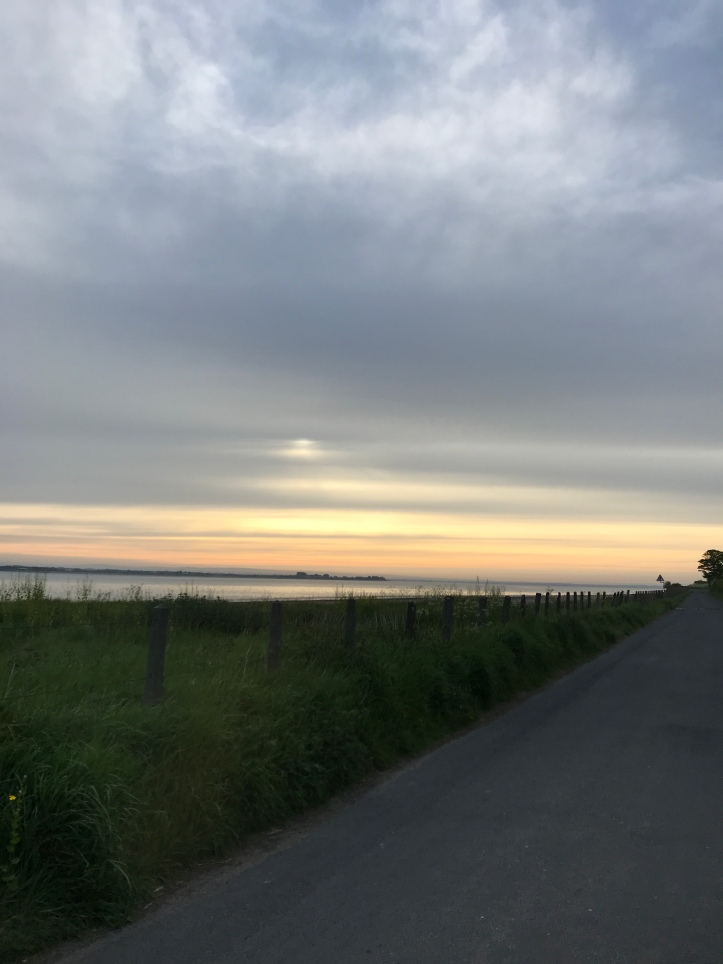 Despite being full of energy and the route on day one being relatively flat, it was equally dull. Although this section is part of the original wall, you should not expect to see any wall until you pass Carlisle. In fact, it was not until we reached the 27th mile that we actually saw what we had come to see and we nearly missed it too!

Though the road to the first glimpse of the wall was relatively flat, it was mainly on road. Which in walking boots, is not great for the feet. We had prepared for all types of terrain, but did not expect to spend the vast majority of the day in boots, on tarmac. But we ploughed on none the less. 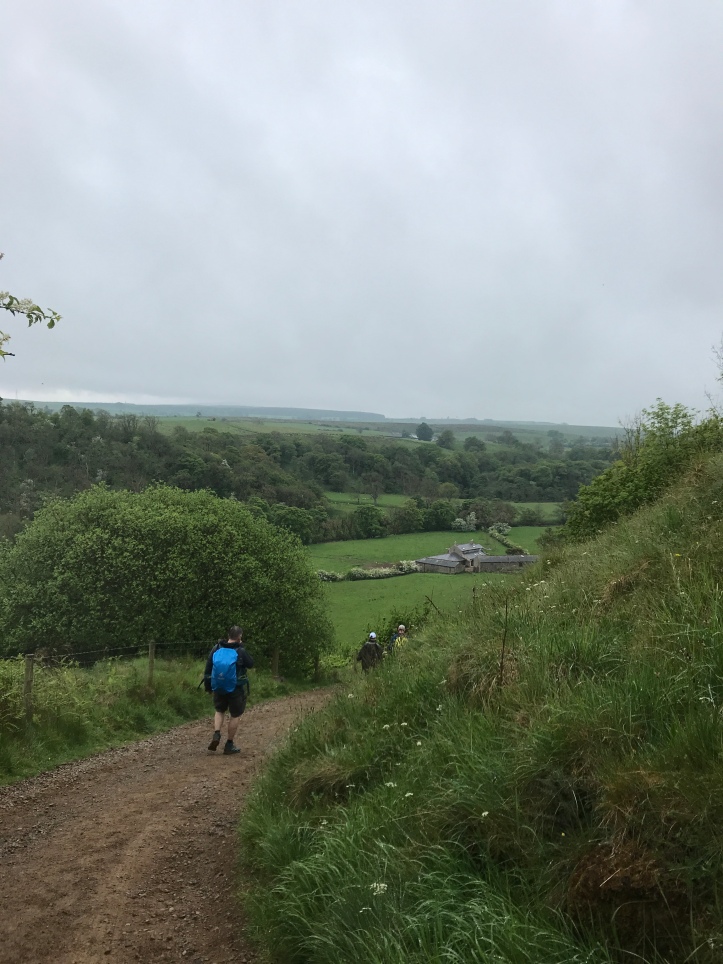 From miles 27 to 34, in Gilsland (our rest for the night), the landscape changed somewhat. Hills became the norm, rocky, grassy terrains were better for our feet in walking boots and the weather took a major turn. Wet, drizzly weather suited our worn out mood. Hills, after hills, an abundance of strenuous stair climbs and tender points started to make themselves known on our feet. At this section, there was “Wall” a plenty. But we were tired, with only a few miles to face before a well-earned rest and the wet weather showing no end, we did not stop to appreciate the views. 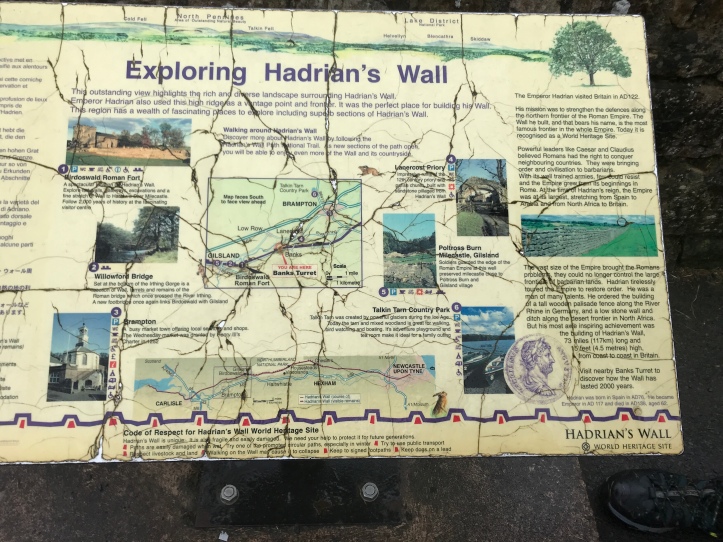 We managed to get to our stop for the night, Brookside Villa, twelve hours after we set off from Bolness on Solway. An impressive 34 miles in 12 hours, with very little in the way of breaks.

Brookside Villa provided the perfect rest. Hot showers, a warming stew and comfy bed was waiting our arrival. The owner of this charming guest house went out of her way to make us comfortable, offering us a celebratory drink (not quite believing we had made it so far in one day) and inviting us to come down to dinner in pyjamas and dressing gowns.

I would have been happy to end our journey here.

After a rather troubling sleep, suffering from restless legs and listening to the heavy downpours over-night, we had to get moving quickly the following morning.

The boots had not quite dried out from the night before, the downpours were not showing signs of clearing up and our bodies ached from the previous day’s slog. Ponchos on, we headed off for what was going to be the most demanding section of the challenge. 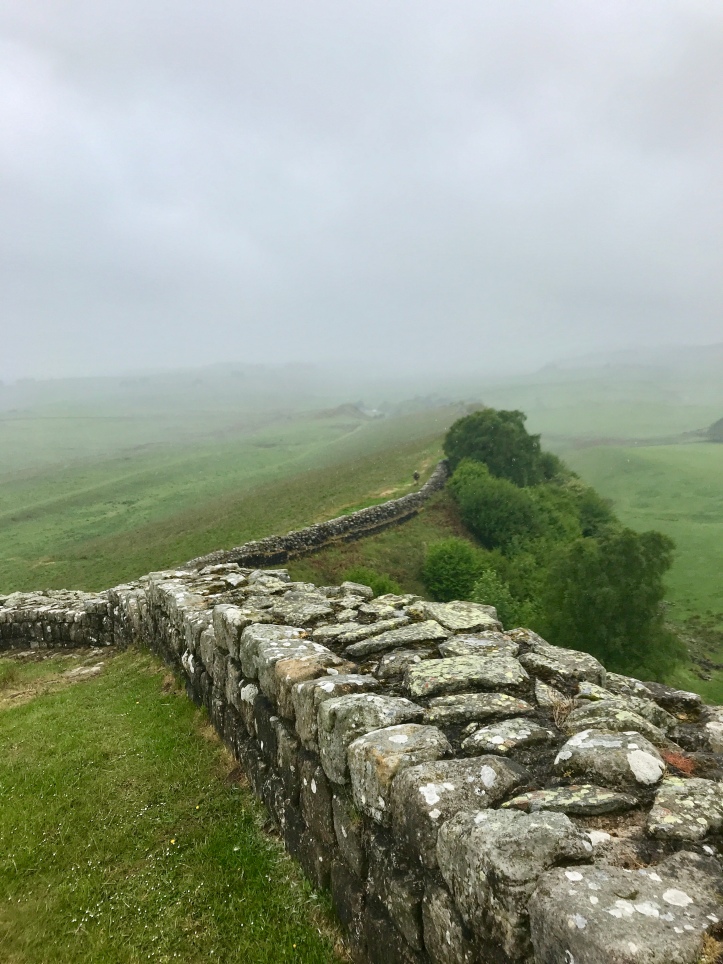 The wall we had craved for the day before, was heavily present on day two. We followed the impressive Hadrian’s wall, along its relentless path, over the crags, rocky trails and hills. I was not in a good way on day two. The consequences of pushing through the 34 miles were starting to show. Being vertically challenged proved to be a problem, climbing the crags aggravated a hip issue I had not experienced in some time, to the point of tears. Moody, tearful and now in pain, I attempted to carry on, with the support of the group encouraging me to fight through. 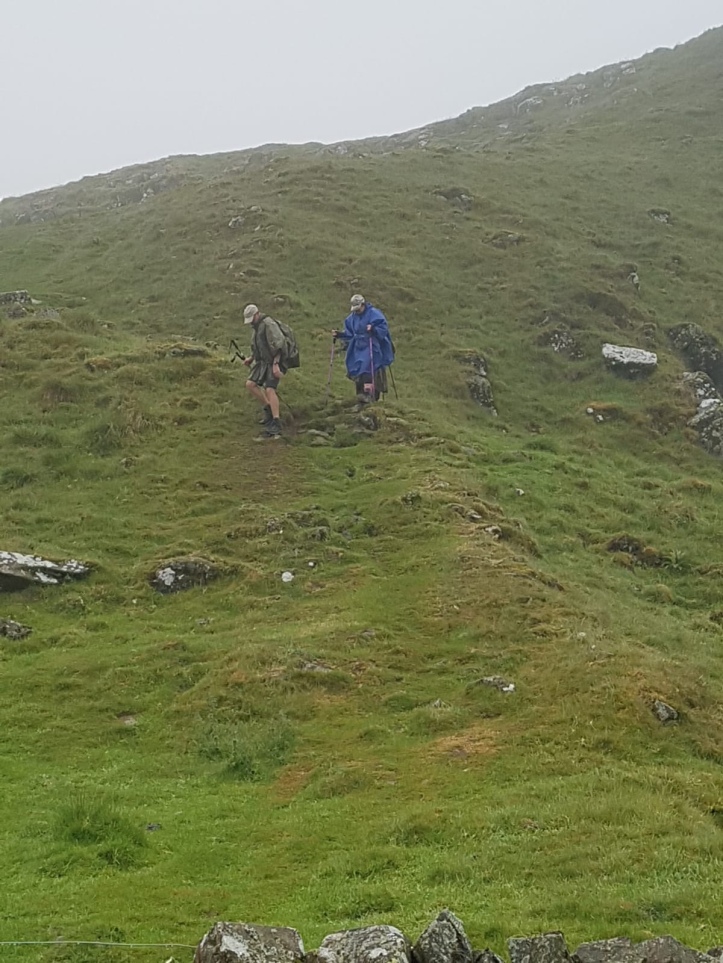 So we did for a while, we pushed ourselves over unrelenting terrain, with heavy rain and wind, with ponchos blowing over our heads, with our feet showing no signs of drying out, we carried on to our rest stop at 10 miles.

At 10 miles, I called it a day. Whilst attempting to dry out and warm up with a hot chocolate, the team attempted to encourage me to carry on, to push a little further. But with the pain in the hip, failed efforts to get warm and not appreciating what we had come to see, my mind was made up. 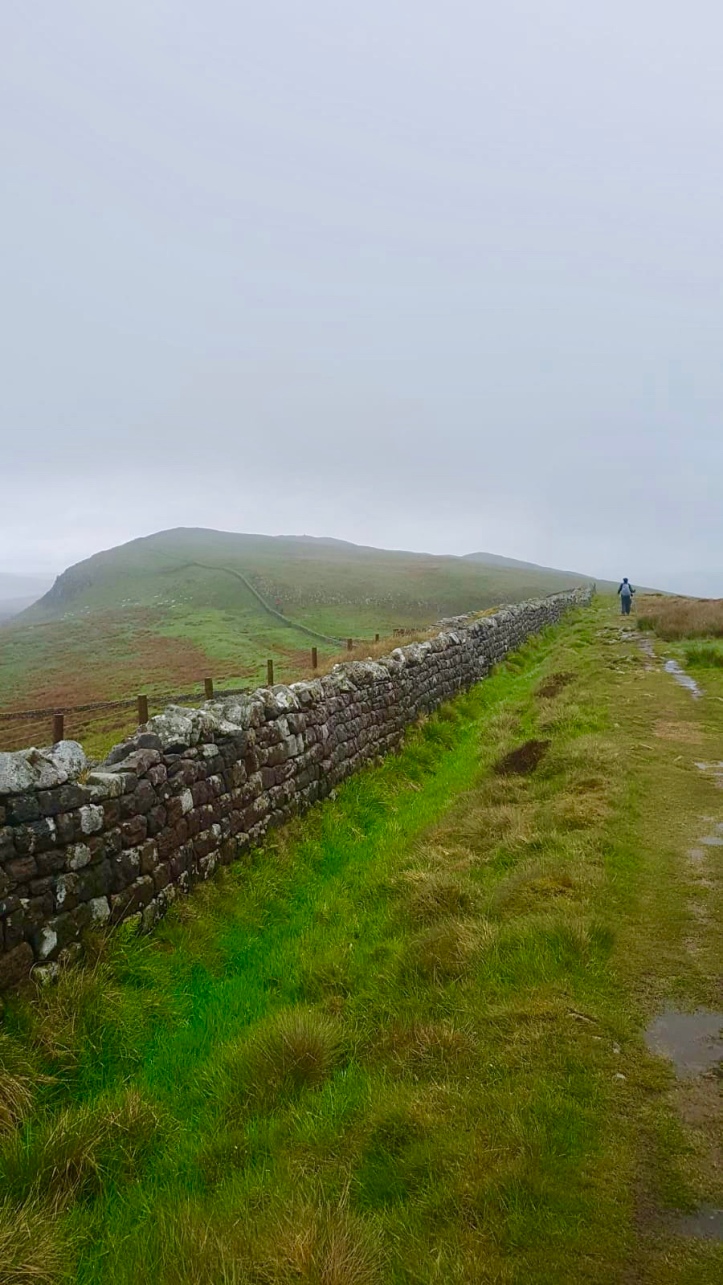 I wanted to finish with them on the final section on day three, and in order to do that I needed to know when to stop right then.

So the team carried on without me for the rest of the day. Whilst taking in the view on the way to our next stop, The Angel of Corbridge, I saw the challenge that they were to face. Whilst the main road was relatively flat, the wall path itself was something else. From the taxi I could see hikers taking the simple, flat route that followed the road (probably the sensible option) whilst the wall loomed over in the distance with ant like people dotting the peaks and troughs.

It was here that I realised how impressive Hadrian’s Wall was, the scale and the man power it took to build such a defence structure – that is still standing to this day.

Back at the hotel, I took a luxurious bath, had a nap and took time to arrange myself for the final stage.

By 4pm, I received a call from the team. They had reached 22 miles but decided that was enough. The terrain continued to challenge them all to the point where they could take no more. Rest and recuperation was needed. Baths and dinner all round, before setting off for the final stage.

Another night of restless sleep and we all awoke aching, irritable and determined to get the miles over and done with.

Day three saw my hip ease off slightly, clearly the rest from the previous day was a good call. However, others in the group were feeling the consequences of the relentless challenge. Sore hips, knees, shins – we had everything. 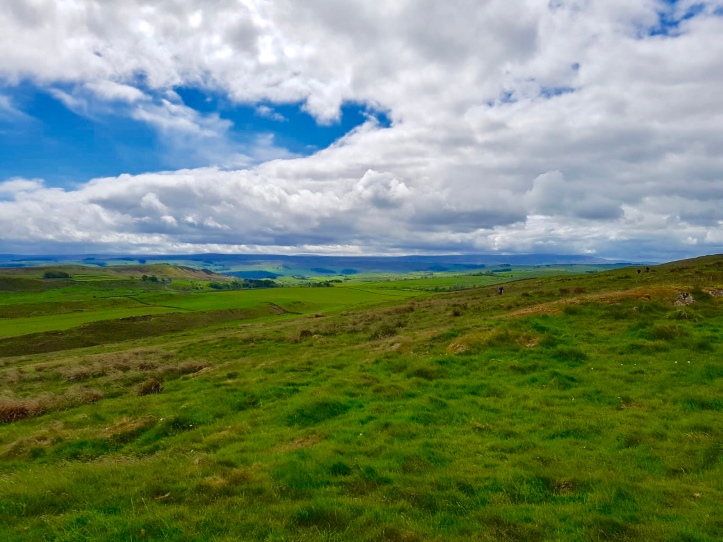 Unlike the previous day, the route was dull (much like day one), with us following the main road into Newcastle. We focused, we pushed on, we set strict mileage goals for rest stops. No matter where we were at that point of time, we rested. So we changed socks on bumpy foot paths and we ate soggy sandwiches in the rain under trees. We did whatever it took to get through to the final resting point. 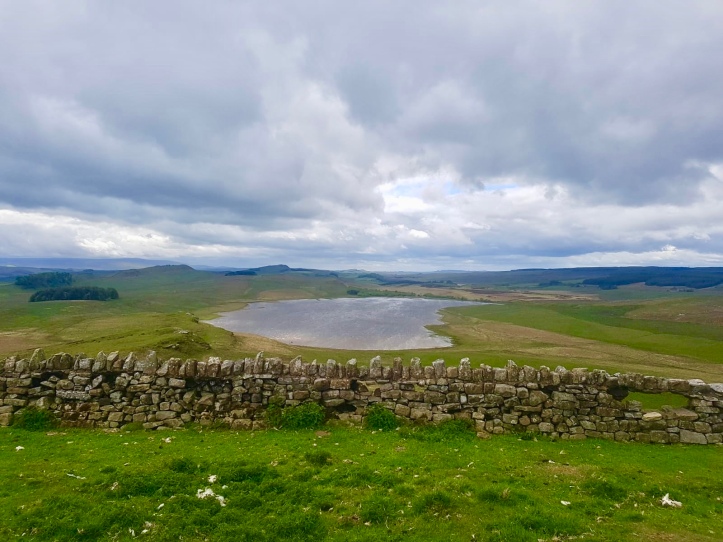 With just seven miles to go, we found a perfect rest stop for cuppa and toilet break. Here we were advised, that not only is it “downhill from here” but all on tarmac. Boots were changed for the comfort of trainers and we ploughed on – rather excited that the journey was coming to an end.

Here we decided we would not be completing the final section of the “wall.” Hadrian’s wall path heads through the city centre to Walls End. This would take us beyond the accommodation we booked for our final night, and through housing and industrial estates which the guide books state, were not pleasant. 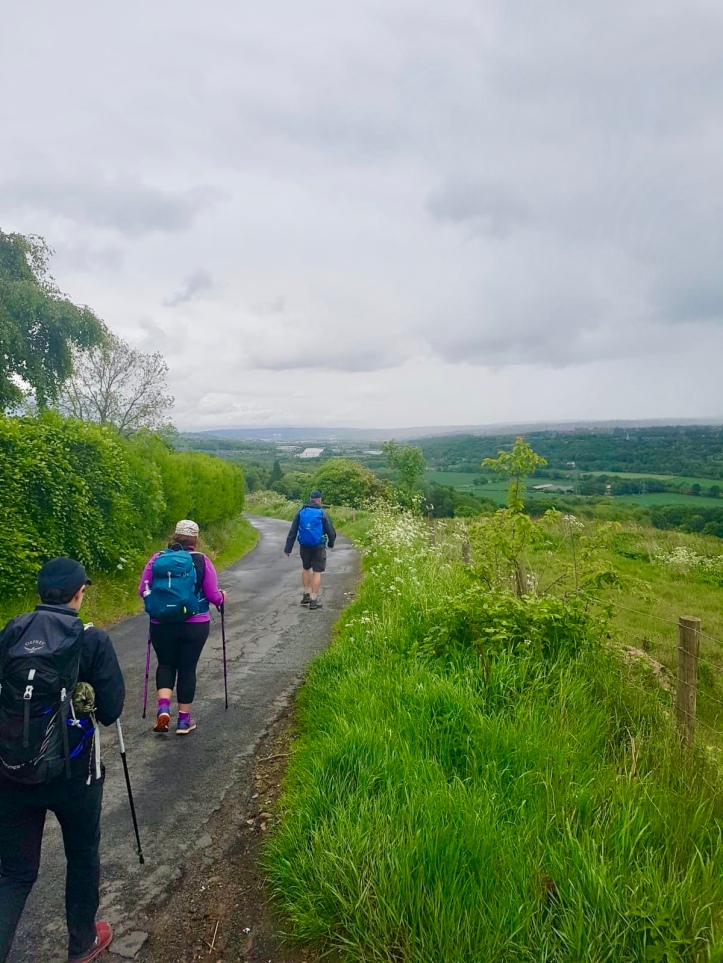 So we make the group decision to simply head to our apartment once we hit the city centre. Walking along the Tyne, the final miles seemed to be never ending. However, with the excitement of the end looming we made it, almost crying with relief when turning the corner to see our final resting point.

We had made it! Walking coast to coast (bar a few miles), taking on Hadrian’s Wall.

In the space of three days I had walked 64 miles, the rest of the team had completed 76 miles. We were all broken and elated.

In hindsight, there were many things we could have done better to make this adventure a little more pleasurable. Despite the meticulous planning of the route, the stop offs, the mileage – we still did not get it quite right.

We did not factor in the additional mileage you experience with the ascent, we could have added in an extra day to ensure we were not pushing ourselves too hard and we could have allowed more time to enjoy the view. 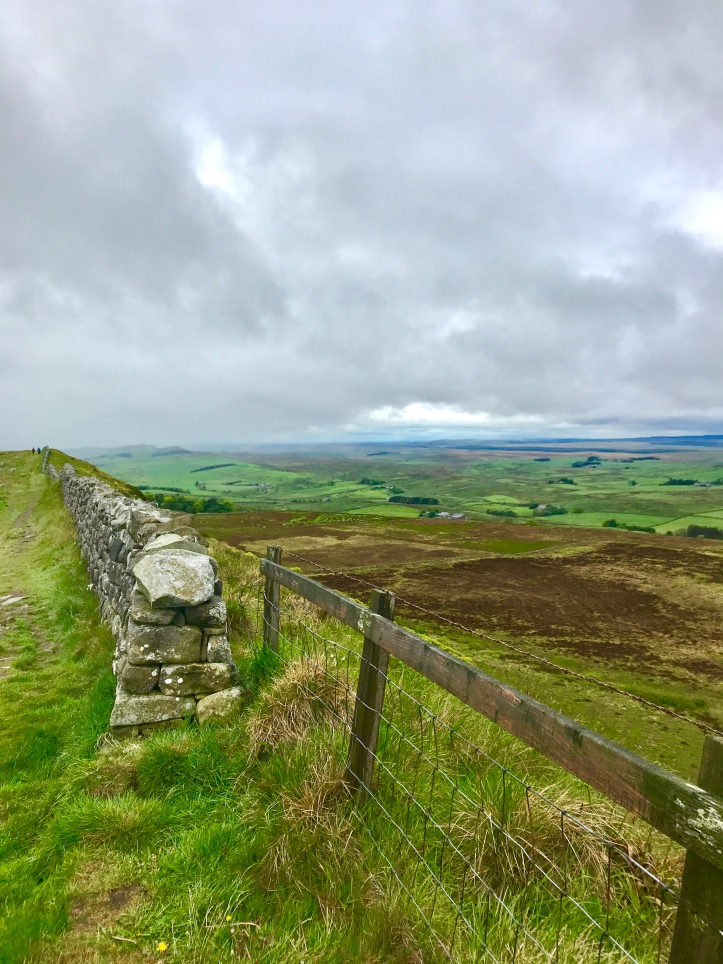 In the face of the challenges thrown our way with weather, terrain and injury, we managed to complete an impressive distance in very little time. It was something to be proud of, it was something we will most certainly remember and talk about in years to come.

Hadrian’s Wall provided me with some fantastic memories, spending time with some incredible people and made me realise I can push myself beyond anything I thought I was capable of.

That said, Hadrian’s Wall path is not something I plan to repeat. I would like to return to the wall, but spending time driving to the best bits and taking time to enjoy the view.