One stone down with Slimming World

Never before have I had to eat my own words.

For many years I scoffed at anyone on the Slimming World plan. Any diet that sees avocado and prosecco as syns had no place in my life. As a vegetarian I have always had a good balanced diet – eating plenty of fruit and vegetables, perhaps needing a little more protein, with the bad treats incorporated too. Yes this does include prosecco.

Over the last few years I have seen many friends and some family members loose an impressive amount of weight on the Slimming World plan. And whilst it is amazing, I still did not understand why they could not grasp the idea of a balanced diet by themselves.

Earlier this year, whilst training for the London Marathon, I allowed myself to relax my diet somewhat. With the extra training I needed the extra fuel. Which was fine whist I was preparing for the big day. However, once race was over those extra calories chased me down pretty quickly.

I did not put any weight on, instead I felt my muscles soften and generally felt rather sluggish. During my summer holiday shortly after the marathon I did not feel “beach ready” – so it was a good thing we did not spend much time on the sun lounger.

Shortly after arriving home from our holiday I was made redundant. At first it was fantastic – extra time to relax, have time to myself and work out twice a day.

When the reality of redundancy sunk in, my routine and habits changed.

My schedule went to pot and as such had an impact on my balanced diet.

It became the norm to skip breakfast, lunch and then get through a family sized bag of Wotsits around 3pm. My motivation to get out running, to keep training started to diminish and I just felt so drained.

Part of this was the mental side to the redundancy – the positive attitude I had at the beginning slowly disappeared and in came the bad habits.

Again, no weight was gained, but I was fed up. Fed up of allowing redundancy take over my life. I needed to regain control.

Joining Slimming World was the first step. Rather apprehensive and still rather dubious about whether this would work for me, I went along to the first meeting.

Welcoming me into the group was the consultant, Donna. Having lost a massive amount of weight herself she made me believe this could work. The last thing you want when joining is a slim consultant who does not understand the woes! Donna understood from the beginning and believes in every single member in her groups.

The support from Donna and other members in group session is amazing. No judgement is given, we often laugh at habits we recognise in ourselves and there is a wonderful sense of community in being a member.

Every member is different, some loose half a stone in their first week, some just a couple of pounds.

I was the latter, loosing a couple of pounds in my first week. And since then having a steady weight loss of 1/2 pound – 3 pounds a week. There has even been a period when I did lot loose at all, remaining the same weight for two weeks. The most frustrating weeks I have every had.

I have not followed plan 100% each week. Im human. I will, at times, drink a whole bottle of prosecco (which is more than the daily syn allowance). However, what Slimming World has done for me is bring my mind back into a healthier place. Helping me plan ahead, to prepare and to make better choices 80% of the time – but allowing me to still enjoy the things I love!

And in doing so not only has it enabled me to loose 1 stone, it has got me back into a schedule elsewhere too! 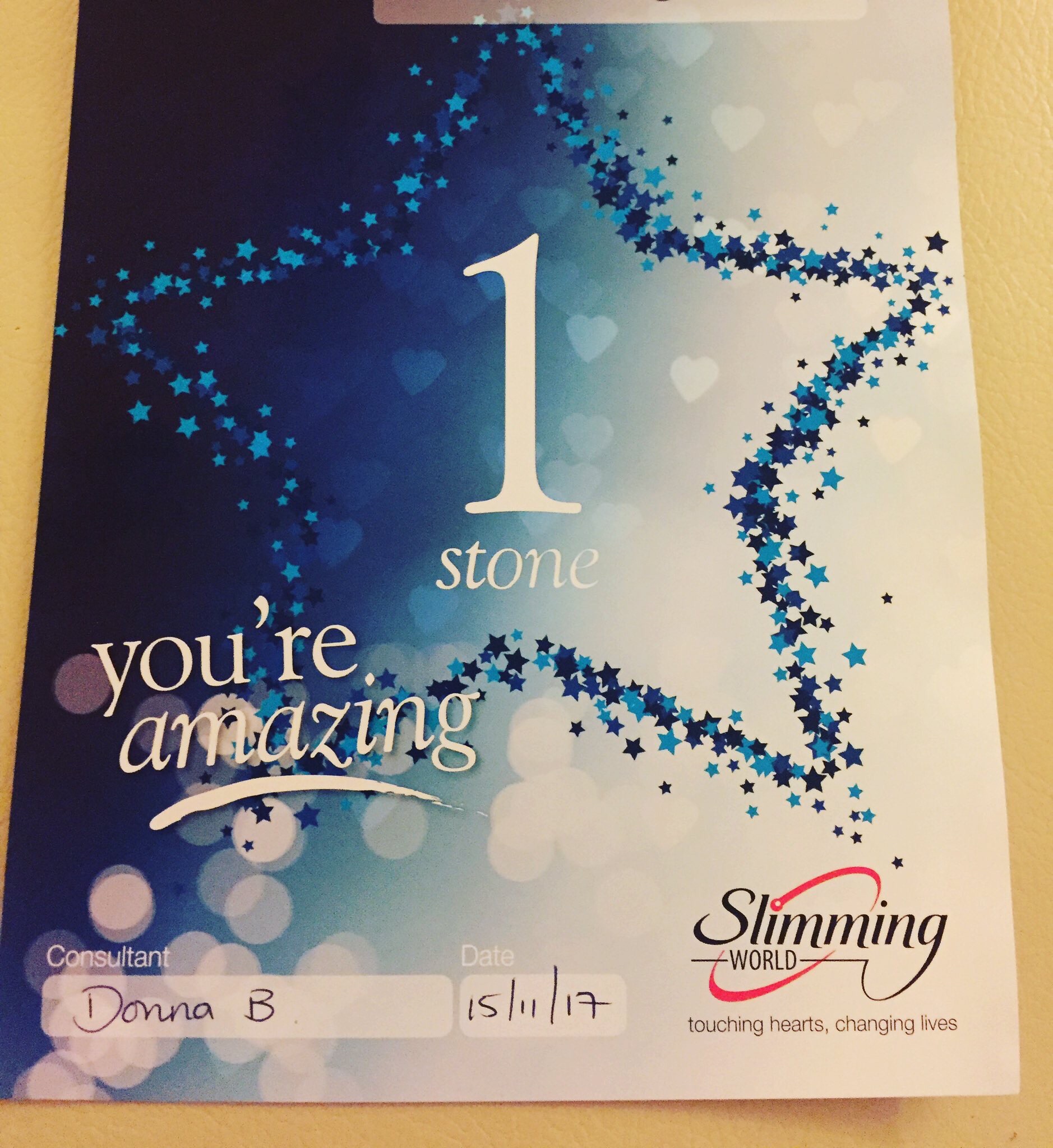 I am back to my active self; getting stronger in Spinning classes and getting in the walking miles for training too.

With many challenges to come in 2018, it would be amazing to complete them a little lighter.

So with that in mind, I plan to increase that 80% on plan to closer to 100%. But at the same time remember there will be days or meals where being on plan is not possible. On days like that, I will just have put it behind me and look to be on plan for the next meal.