I always like a change of scenery when running. Let’s face it, covering the same routes over and over again can become rather monotonous. So, when I knew I was heading up to Northumberland for a family trip the first thing I did was plot a running route on Strava.

With my 11 year old niece in tow (who has been inspired to run since watching me run the London Marathon), I set off each morning. Not for a long run, as I did not want to push my niece too far too soon, but enough to get her learning the basics of road running. Each morning we went a little further, a little faster. 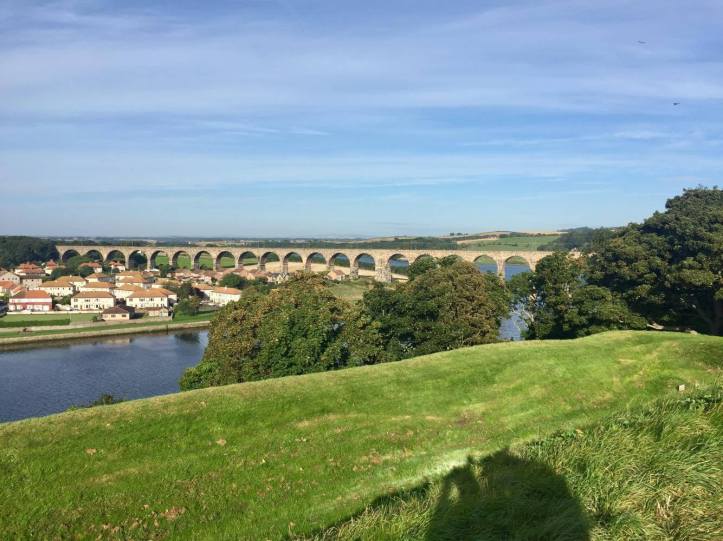 A downhill route into the town of Berwick-Upon-Tweed, proved to be the perfect way to get her started on her running journey. From the town we headed up to the castle walls and followed the path, with provided picturesque views around the outskirts and along the sea/ river front. It was a beautiful route, a route that offered such peace and tranquillity early in the morning  – one that I could easily run time and time again. I am a sucker for running with fantastic views. And the views were simply amazing, though even in the height of summer, rather breezy once you stopped running (so I would advise taking a long sleeved top to throw on once your run is over).

Our adventures did not just stop at running and walking the castle walls. We also ventured over to Holy Island for an afternoon exploring. A tidal island off the coast of Berwick-Upon-Tweed it is one that offers plenty to do, with Lindisfarne Castle (currently closed for renovations until 2018), ruins of Lindisfarne Priory, a nature reserve and plenty of hiking opportunities.

It even offers a scenic running route too – though this was not something I was able to explore on a family outing. Whatever you do whilst on the Island you have to pay close attention to the tidal times – which change daily throughout the year. Make a mistake or ignore the signs whilst driving along the causeway when the tide comes in and you will find yourself in somewhat of a pickle. And most likely in need of being rescued. We did not have such trouble – looking up the times in advance and ensuring we were off the island in plenty of time.

Beaches along the Northumberland coast line are also stunning – though again they can be rather chilly. With the tide far out they can be perfect spots for those who love a beach run (I am not a fan myself) or even a long walk.

Taking it easier this week whilst away has done me the world of good. I ran shorter runs and having my niece to look after allowed me to take the focus away from my own running – I focused on her running instead.

In addition, the long walks around to town and around Holy Island without the pressure of time or expectation helped clear my mind. The fresh sea air did me the world of good.

That said, I made the decision on returning to not run the Bedford Half Marathon. I was not ready for both the physical and mental challenge, and I realised that that is okay. Sometimes you need to make decisions that are best for you and this time round I have no regrets about not taking part.

There are plenty of races coming my way over the next few months. Now it is time to get back into the racing mindset.