The first Sunday in June. It was a beautiful sunny morning and I had signed up for a free 5k run in my local park, run by Decathlon. The only problem being, I had lost my mojo. Not long returned from the USA, rather jet lagged and having not really trained for two weeks, I almost didn’t bother to show.

I am so glad I did. A maximum of 500 participants were able to sign up and on arrival I could see a fair amount of people had certainly done that. From all ages and abilities this race was put together by Decathlon to encourage people to participants to run and at the same time bring the community together. And they certainly had done that. 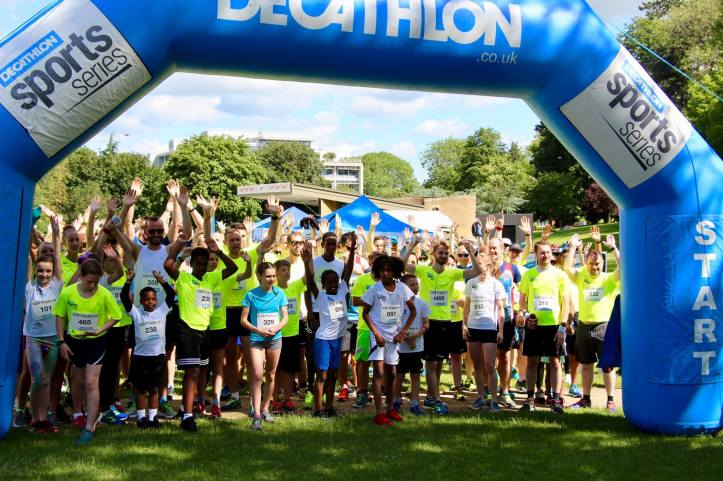 It did not matter about your ability and that definitely showed. You had the fast runners, who you could not see for dust, the regular runners (I would like to say myself included), those who were probably less experienced in running and even whole families with children – who sprinted out at the beginning only to be advised by parents to pace themselves.

The route was not easy. Anyone who is familiar with Harlow Town park would know that. A hill start, on small park paths meant it took time for me to fall into my easier 10:30 min/mile pace. Though I did get there eventually, the hills that followed after pulled back my pacing and after running on flat, easy surfaces in San Diego the weeks prior I was rather unaccustomed to the inclines, the people and even the pot holes. That said, I finished in 35 minutes – which is still respectable – giving me the starting block to get back into a training routine. It also gave me the buzz of running again. That uphill start, became a down hill finish and I had the joy of a sprinting all the way to the end, passing many runners who over took me in the last mile.

A medal, of course, was available from the local Decathlon store along with a goody bag filled with treats, plus you get a free t-shirt too. As a marketer, I find that this was a clever tactic to get footfall in store after the race. After all if you are putting on a free race you want to encourage those people entering to spend a little money in store after.

Overall It was a well organised event by the team at Decathlon – plenty of people on course to keep the runners safe, great atmosphere and the most important thing – they got people running. Anyone that encourages people to get active deserves a gold star in my book.

Would I run this again? Yes – definitely. I really hope my local store arranges another event like this. After running long distances over the last six months it was rather nice to run just a simple 5K. To know that it will be over in less than an hour, you don’t have to pack a running bag and probably don’t need to carry water (unless it is a hot day), was rather refreshing. No planning, just go.

And with this I want to continue with the 5k routes in Harlow Park. So with the “Park Run” membership that I signed up for years ago and never used – I am going to keep attacking the hills of the park in the hope to improve each week.