Sunday 12th March saw me complete my final training race before the London Marathon. Having spent the majority of my childhood in North West London, the North London Half had a particular interest for me. Part of the route saw you run through Mill Hill, where my Grandparents still reside, round Saracens stadium (Copthall to those who grew up with Summer sports days and Sunday’s spent swimming at the pool) and then back along Graham Park Way – passing what used to be Barnet College,  which is now a building site for new housing. Add to this, finishing at the iconic Wembley Stadium itself was enough to draw many runners to sign up.

Gathered in a rather crowded pen before the race began, I started to feel rather anxious. Perhaps it was due to the fact this was the last race day before the big one, but I just kept thinking about “what ifs?” What if I feel like this on Marathon day, what if I cannot complete the race, what if I don’t feel ready, what if I don’t get my long runs completed……too many “what if’s” to think about before the whistle blew.

It is safe to say that I did not start this race well.

An uphill start from the get go, this race had to be the most evil course I have experienced to date. For the first three miles runners faced hills after hills, knowing that on the loop back to Wembley you would have to face these hills for a second time going the other way. I started before the 2:30 pacer thinking “great – I will get a better time than Hampton Court Half.” Until we got to the third mile. The pacer caught up with me, stayed alongside me for a while but then, with all his experience, left me for dust as the hills got to me and my pace slowed, at one point even to a stop. 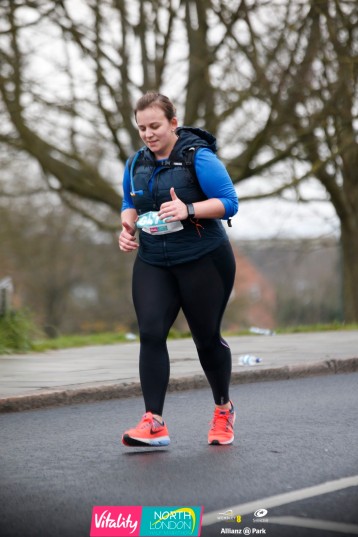 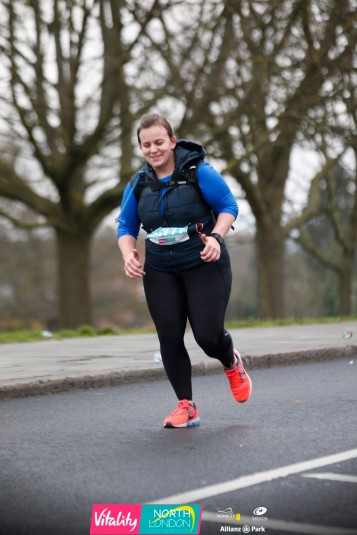 With heavy legs I trundled along, allowing myself to walk when needed during some tough inclines, taking on water and more energy jellies than I would usually take on board. A far cry from the comfortable run of Hampton Court Half Marathon.

Reaching Bunns Lane, I had to fight the urge to run off course and flee to the safety of my Grandparents just a short distance from the actual route in Mill Hill Broadway. Head down I kept going, round Saracens stadium, back along Bunns Lane and leaving the comforting thoughts of home behind. 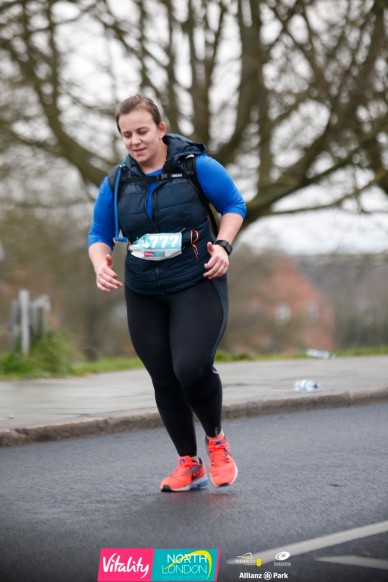 On the return to Wembley I managed to keep some solid pacing going, mainly on the flat, thinking just one mile at a time. Just before mile 10 the route saw runners going back along Hay Lane and climbing the mountain than we ran down on the way out. At this point, I only saw one person actually running – the numerous hills and miles wearing out the majority of the runners taking part. Even some of the toughest looking men around me were walking – so I knew it was not just me.

Several more hills followed, then I turned the corner to mile 12 and felt such a sense of relief that I was on the home straight – which of course saw us running on an incline towards and round the stadium. Finally, running through a service entrance I made it onto the pitch at Wembley. With the spectators cheering me on and my name being announced over the tannoy the pain and frustrations of the miles I had just run completely slipped away. Volunteers handed medals, drinks and some even put out their hand for a high five – making you feel special, like you have achieved something, congratulating everyone no matter what their time.

Despite not enjoying the course itself, and knowing that I will NEVER be running this one again, everything on the day was spot on. From the organisation, to the the volunteers, the medal and even Wembley itself. A race can be a bad run for you personally, but if everything else around you makes it slightly more enjoyable then that’s what counts.

Am I bothered that I got my second worst Half Marathon time here? No. Although I would have liked a good time, time itself was not a focus for me here. With this being race being sold as a undulating course I knew it was not one to chase a personal best. As with all the races I have taken part in this year it was all about practice and endurance. Whilst I failed miserably with endurance on this occasion, I know that the London Marathon will not see me having to face the hills I experienced on Sunday. That, for now, gives me comfort as I look to attempt my 18 mile long run for the second time this weekend.

Plus I can now say I ran round the pitch at Wembley Stadium!