Tactical Advance to Battle, aka “tabbing.”

I will always remember my first tabbing session. With a group of fellow Regiment Fitness members, around two years ago, I attended a training session for WAR Adrenaline Race (featured in my Blog earlier this year). During the session we were issued with Bergens, almost the same length as me, that weighed between 15-20kgs – then told to run! Run as fast as your legs could possibly go.

This took my training, at the time, beyond levels I have ever experienced. With the Bergen half way down my legs it was almost impossible to run. I was bent over double with the weight of the contents and every single part of me was screaming!

A few weeks later, I attended a further session dedicated only to “tabbing.” In this one, at times we had to wear two Bergens; your own along with a member of your team’s over your chest. If I thought my body was screaming last time, then this time round it was off the chart.

Although it was the hardest training I have ever experienced and I felt like crying for the whole hour, I kept booking sessions. 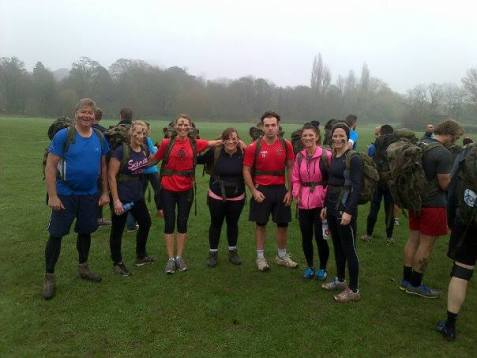 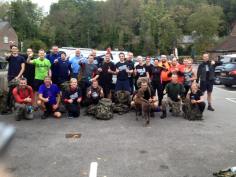 Eventually fellow tabbers and myself discovered the “short back Bergens” – designed for the shorter person, like me! We purchased these beauties and found that the tabbing sessions were more bearable as we were not spent most the hour bent over double.

So, with the comfort of my own short back Bergen, packed out with pillows and heavy weights I started to enjoy the beasting we experienced on the tabbing sessions.

Over the last two years myself and other boot camp members have travelled far and wide before day light on a Saturday morning. And on a few occasions, participated in a number of “night” tabs all in the aid to increase our fitness levels.

Tabbing sessions are not easy. They are most definitely not for the faint hearted and designed to push you beyond your limits. I have lost count on the number of tabbing sessions I have taken part in over the last two years, but I would like to describe myself as a “well seasoned tabber.” I am never at the front of the pack, nor the back. Usually I am in the middle encouraging those struggling behind me.

At the beginning of this year, myself and two others decided to take part in a double tabbing session back to back. This consisted of a two our tabbing session at 7pm on a Friday evening followed by two hours at 6am the following morning. I was at my fitness peak and we completed the Friday and the Saturday without any major issues (though the Saturday morning was rather tedious – due to achy muscles and fatique).

Then disaster struck for me not long after. I developed pneumonia – so training was out and tabbing was a definite no no.

It took a very long time for me to get the courage to return back to tabbing after my illness. My confidence was gone and I was worried about being at the back, slowing the pack down. However, as I started getting stronger again I decided to take the plunge and get back into it. Not wanting to over do it, weight was removed from my Bergen to ensure I did not overdo it on the first session back.

So at the beginning of June, I took the plunge back into the tabbing world. It was tough, it felt like my lungs were going to explode – but I plodded along and would like to think I kept up.

I have continued to participate in as many sessions as possible since. So, when our trainer – Jonny – advertised a 90 minute session I thought “why not?”

I arrived yesterday morning to discover only five people had booked on. Me, the only female, and four other long legged runners. I knew straight away it was going to be a session that was going to make or break me.

Within 30 minutes it had broken me. I was struggling to keep up with the guys and loosing confidence with every step. Every session I had participated in before had someone slower, someone who needed me to encourage behind me. This time I looked back and there was no one. When I looked ahead all I could see was dust from the fast runners in front. 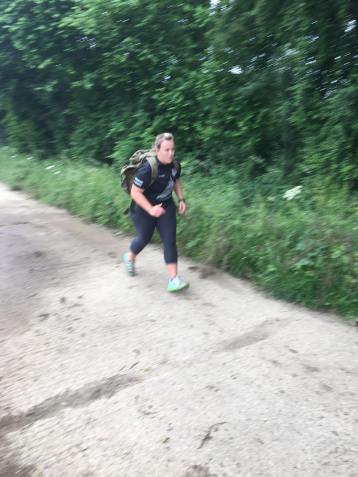 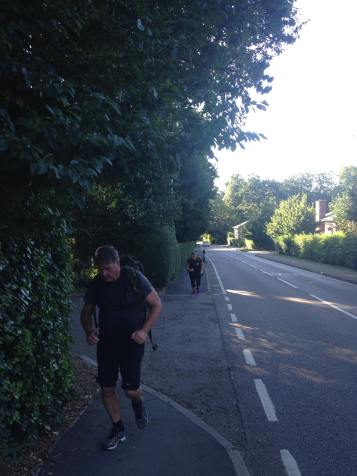 I wanted to quit, head back and I told Jonny so. But he and all the other guys refused to let me give in. They pushed me on and on. Hill sprints followed, where I thought my lungs were going to burst, my legs fall off and I actually thought I would pass out. The final push up these hills broke me. I had a wobble, I broke down, I cried and had a mini panic attack.

Sensing my distress, Jonny sent the guys off running round a field whilst I recovered myself. Then we were off again. The final section of the session – up Hadham Road! If anyone lives in Bishops Stortford or knows the area you would be aware of this road. It is the most horrendous incline you would ever come across as a runner. It looks like nothing from the bottom; but goes on for what seems like miles. Running this incline without a Bergen would be a challenge enough. With the Bergen, I wanted to die – or hide in a bush.

The struggle and pain at this point was indescribable. The guys were off and I was trotting like a baby elephant miles behind. But Jonny would not let me give up. Everytime I felt myself slowing myself to a walk he appeared to spur me on; telling me to “stop shaking my head.”

Eventually we made it back; my legs burning, lungs exploding, mind blowing, half dead!

This tabbing session was the hardest thing I have had to done for a while – and I had not long ago completed Mission 24!

The lesson learnt this time round; there is always more you can give. The mind can play amazing tricks on your body. It will make you think you cannot go on, that you cannot give anymore. But lucky for me this time, Jonny and all the other guys training knew I could give more even when I couldn’t see it myself. I may not have been able to go fast – but I could get to the end.

This day showed that there are days when getting through to the finish is hard. The only thing I can advise is train with people who you know will drive you on, push you to your limits and be there to give you a hug when you break down.