On Sunday 15th July I took part in the British 10K for the third year. Despite running this event in previous years, I was overwhelmed by the number of runners taking part. In it’s second year run by Virgin Sport it seemed to have attracted far more participants than ever before.

The organisation in the lead up and on the day of the event was spot on. With the UK being hit with a glorious heat wave, all runners were advised to run with caution on the day. “Extreme” weather warnings were in place to ensure that runners remain sensible and organisers informed runners that the day was not one to race for a PB. 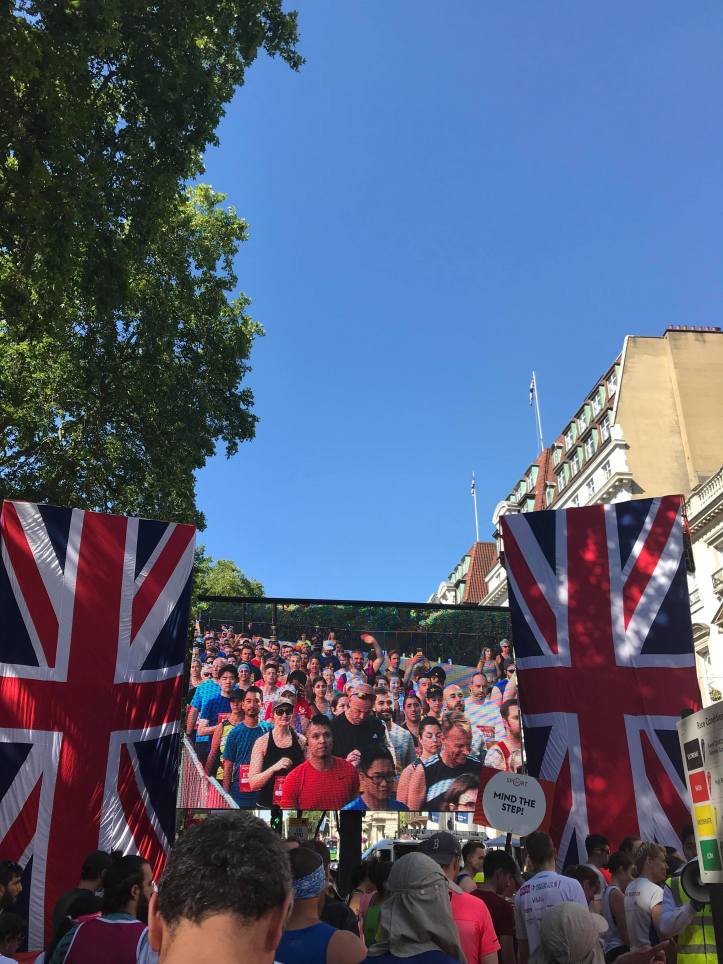 Personally, I was quite happy to take on the advice given. To take it easy, to trot along at an easy pace and ensure I stay hydrated throughout.

Usually getting to the start of this race is rather slow. This day was no exception. With thousands of participants taking part we were set of in waves as expected with a large event. It was a good 40 minutes before I managed to get going from the start line at Piccadilly.

From the get go I maintained an easy going pace, not wanting to over exert myself too soon.

Once reaching Piccadilly Circus the route saw us turning left up Regent Street, with street entertainment, before a sharp u-turn coming back down in the opposite direction. This then followed a nice downward stretch along Lower Regent Street before heading along Pall Mall to Trafalgar Square, Charing Cross Road and the Strand,  along Victoria Embankment, running alongside the River Thames, across Westminster Bridge, Victoria Street and then finally heading to the finish at Whitehall.

It is a fantastic route, especially if you enjoy taking in the sights of London whilst running. These streets have formed many of my London Road races over the years. The London Marathon has seen me run along the Victoria Embankment in the final miles, London Winter Run follows a similar path along the Strand before entering the city of London and the London Landmarks Half Marathon also sees runners pass through the Strand and finishing Whitehall in the opposite direction.

There is nothing like running in London Town during events like this, when the roads are closed to traffic.

This race was no exception. As usual crowds were out in abundance, cheering on strangers and loved ones. A number of street entertainers lined the streets, from steel drum bands to choirs – all bringing the spirit of London alive.

The temperature on the day was not kind for runners. Despite the city being a fantastic place to run, you do find that there is very little breeze as heat gets trapped between the buildings. On this day London was easily comparable to a rotisserie oven. Even I, the sun worshipper, was diving for the shade or mist showers at any opportunity.

I remained strong and steady for the first half of the race. But at times when I needed to take on water, I slowed to a fast walk, to ensure that I stayed hydrated. I knew being sensible was far more important than attempting a PB, so I took it easy. Perhaps a little too easy for my liking. At times when I could have pushed myself harder, I chose not to. I was more concerned about enjoying the race, finishing and getting my hands on a another piece of bling.

And I got round. Finishing not with my best time for a 10K race, but beating my time from 2017 by several minutes despite the hotter temperatures.

That to me was a great finish.

I have no doubt in my mind that I will back to attempt the route for the 4th consecutive year with an aim to find a pacer to keep trying for that sub 60 minute goal.

Well done to all runners who took part and thanks to Virgin Sport for another successful, enjoyable British 10K.